The Longest Race: A Lifelong Runner, An Iconic Ultramarathon, and the Case for Human Endurance 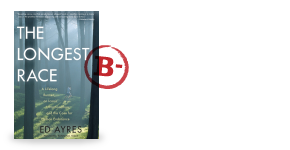 Taylor had also designed the smallest atomic bomb ever exploded — the so-called suitcase bomb, which could fit in the trunk of a car. By the time I met him, he had renounced that legacy and was laboring to warn the world of the dangers of nuclear leaks, thefts, accidents, and terrorism. He had surmised, several years ago, that the World Trade Center might be a prime target for terrorists armed with a suitcase bomb like the one he had designed. Taylor's journal, which I was hired to edit, was distributed to all the national and international nuclear agencies — none of which seemed much interested in his warnings.

There was a lot of money to be made in the new industry of nuclear power, and there were well-lubricated revolving doors between the nuclear agencies and utilities. The editing work was both intense and frustrating, and after work each evening I'd go out for long runs along the DC bank of the Potomac. Running gave me a needed escape, but at the same time I found myself meditating on those remarkable parallels I saw between our fast-growing global industries and our overstressed selves. Now, a quarter of a century later, I was in a position to draw on what I'd learned about the nature of human capability, whether to power missiles or propel our own bodies, and to use that knowledge to run faster than I once would have thought possible for a man my age.

Did that mean what I could do as a runner was now more important to me than what I could do for my embattled planet? Not really. I could at least have some control over what I did with my own body and soul. And in the long run, I thought, that might be what really counts. We were tightly crowded together, the top-seeded guys in the front row using whatever subtle hip-bumping or leaning was needed to hold their places behind the white line, while the rest of us jammed as close as possible behind them on the narrow street.

We were a sea of bare arms and legs and, despite the cold, even a few bare shoulders of road-racer types wearing singlets instead of high-tech T-shirts. There were men and women of all ages here, but the great majority were twenty to forty years younger than I. The sight of the younger ones bouncing up and down on their forefeet to keep warm threw my memory back to when I was their age. I felt too old now to be bouncing; I might need that bounce in the last mile. I had started running with high school cross-country and track in the s, followed by college cross-country and my first road races in the s, when new chapters of the Road Runners Club of America were springing up all over the country, and eventually I'd gotten hooked on marathons.

The first time I'd ever heard of an ultra marathon was in the early s, when there were only a handful of ultras in the whole country.